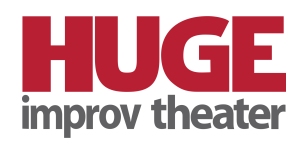 The HUGE Improv Theater is an artist-led company dedicated to supporting the Twin Cities improv community through performance and education.

About TCIF – The Twin Cities Improv Festival is now in its fifteenth year, produced in partnership between Five Man Job and HUGE Improv Theater.
–
About HUGE– HUGE Improv Theater is a non-profit theater for improvisation founded by Butch Roy, Jill Bernard and Nels Lennes – HUGE opened its doors in Uptown in December of 2010 and has since been home to TCIF and more than 500 shows annually.
HUGE Theater was named “Best Theater For Comedy” by MN Monthly
–
About Five Man Job – Five Man Job is one of the longest running improv groups in the Twin Cities – consisting of Butch Roy, Nels Lennes and Lauren Anderson – and producers of the Twin Cities Improv Festival and Improv A Go Go, the weekly improv showcase now in its fourteenth year.